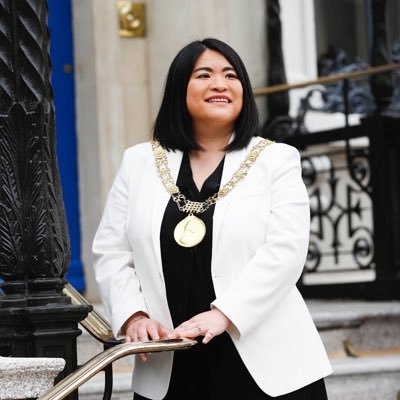 The Lord Mayor of Dublin Hazel Chu would like to announce that she has chosen Marie Stears as the winner of the Lord Mayor’s Award for the month of February.

Marie is a nursery nurse in Crumlin Children’s Hospital, and has worked in the hospital for 37 years.

“This month’s category was Hospital Medical Staff and to be honest we simply don’t have enough awards to celebrate these people,” said the Lord Mayor. “I’m sure I speak for everyone when I say that every single one of them is a hero. People are at their most vulnerable when they’re in hospital and Marie is a great example of how to treat people of all ages and put them at ease. It’s amazing what a simple smile can do to keep spirits up. I’m particularly in awe of how this month’s winner has managed to keep smiling despite the personal challenges she’s facing. Well done Marie and congratulations on your award!”

Marie was nominated for the award by her colleague Geraldine de Búrca.

“I’ve known Marie in a nursing capacity for more than 25 years, she has worked in Crumlin Children’s hospital since forever,” said Geraldine. “As a Nursery Nurse, she has moved from Intensive Care to neonates to the outpatients department over the years, and never once has moaned or complained. She forever has a smile on her face and couldn’t but put you in a good mood. Particularly with the challenges of the past year, wearing PPE, she has gone to her job, despite having a very ill father, and an elderly dependant mother.”

As winner of the award for February, Marie received a piece of specially-commissioned sculpture and a gift voucher worth €1,000.

“I’m absolutely dumbstruck to get this award,” said Marie. “I just feel so thrilled and humbled. We have so many brilliant people here and really they deserve this a lot more than me. I always try to keep a smile on my face because there’s parents and children coming in and they’re nervous, so I try to be as cheerful as possible and make it a happy place for them. I love the sculpture, it’s absolutely beautiful, I have it on the mantelpiece already.”

The piece of sculpture commissioned for the Lord Mayor’s Awards is called ‘Harecules’ and was made by sculptor Stephanie Hess and sourced through DesignYard. The hare symbolises strength in Celtic mythology.

“I feel enormously honoured to have been commissioned to create 7 bespoke bronze sculptures which will be presented to the recipients whose extraordinary efforts in this extraordinary time have made a real difference in the lives of their fellow citizens,” said Stephanie. “I wanted to portray the balancing act achieved by our frontline workers in a joyful way. The hares playfully represent the support & strength needed to juggle the elements of care, work and family, as well as embodying the sense of community and celebration.”

The Lord Mayor’s Awards, which usually take place annually, are taking place monthly this year to honour and thank those who have worked tirelessly for us on the frontline in this pandemic.