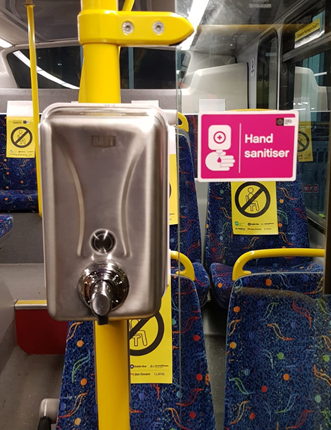 Two major public transport companies in Dublin and the Greater Dublin Area, Go Ahead Ireland and Dublin Bus, are set to install hand sanitiser units onto their entire fleets respectively. They will be situated at the centre (exit) doors where passengers can use them when they get off. The news comes after a number of people complained that both companies do not have hand sanitisers mounted on their buses yet.

Go Ahead Ireland have already been testing this feature on a small number of their fleet and routes for a few weeks. Last week the company officially announced that every bus in its fleet will have hand sanitisers installed over the coming weeks.

Thanks for all the feedback on our hand sanitizer trial. #GAI are delighted to announce that hand sanitiser units will be installed across the full fleet in the coming weeks. #customerfeedback @TFIupdates
#StopTheSpread pic.twitter.com/koaKZviSzI

Dublin Bus CEO, Ray Coyne, also announced that his company will have a similar trial to that of Go Ahead Ireland. The hand sanitisers will be tested on twelve buses across routes 37, 150 and 151.

Safety is our #1 priority @dublinbusnews . That’s why, today, we are starting a trial of on-bus hand sanitiser units. They will be located by the exit doors for customers to use as they disembark. In total 12 buses will be involved in the trial over three routes- 37,150 and 151. pic.twitter.com/ykwwEl68Ch

Earlier this year, it was announced that buses will have enhanced safety measures ranging from reduced capacity to extra cleaning at the terminus in order to combat the spread of the Coronavirus. Cases have begun to rise here again with nearly 70,000 total confirmed cases and 2,000 deaths in the Republic alone.

Telecom Éireann investors are being sought to participate in new documentary

Jack Dempsey Nov 27, 2021
Tests will be available to purchase from the tills

TFI 90 Minute fare to support seamless travel across the Public…

Nov 18, 2021
The revamping of the fare system will allow passengers free transfer between Dublin Bus, Luas and most DART,…

Nov 15, 2021
There will be a Reindeer Christmas Decoration Workshop in Our Lady’s Hall in Drimnagh that takes place on Wednesday…

Nov 11, 2021
Yesterday it was announced that the second phase of the new BusConnects Network called the C-Spine will begin…
Prev Next 1 of 52