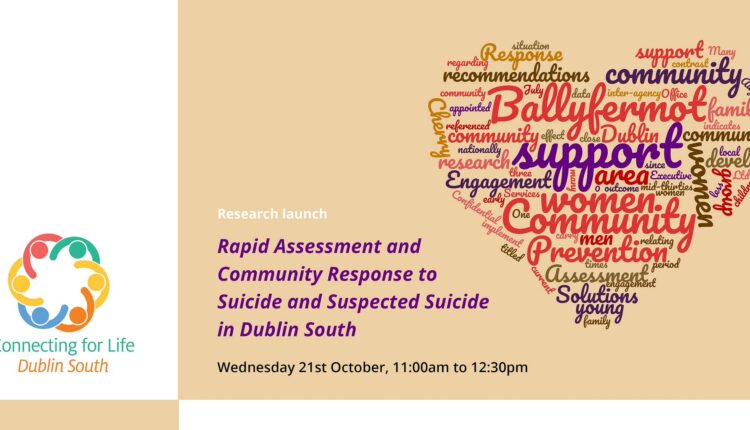 The launch of the Ballyfermot Rapid Assessment Research entitled ‘Rapid Assessment and Community Response to Suicide and Suspected Suicide in Dublin South’ which was commissioned by the National Office for Suicide Prevention will take place on Wednesday the 21st of October from 11:00 am to 12:30 pm.

In February 2020 a rapid assessment of the current situation regarding suicide within the Ballyfermot community was ordered. The research covers that there have been 26 deaths by suspected suicide in the Ballyfermot and Cherry Orchard community since 2015, many of which, were young women with children.

Between April and July 2019, 8 women aged between early twenties to mid-thirties, died by suspected suicide in or close to the area within a 10-week period. Many of these were young mothers.

This is an online event. Attendees will need access to a laptop or computer with video, audio and a microphone. You will also need an internet connection. To book a place go to the Ballyfermot Local Drug and Alcohol Task Force eventbrite page at https://www.eventbrite.ie/e/ballyfermot-rapid-assessment-research-launch-tickets-121384695893?utm-medium=discovery&utm-campaign=social&utm-content=attendeeshare&aff=estw&utm-source=tw&utm-term=listing